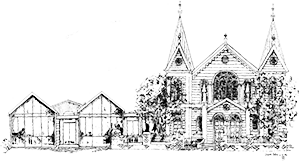 In early 1973 a number of Wellington Tongans who attended and worshipped at the Sunday English-language services at Wesley Church, were invited by Paula and Lolohea Makisi for a meal in their home in Newtown afterwards. This became a regular event, and while waiting for Lolohea's cooking it was realised that they could use the time to sing, pray and have fellowship in the Tongan language. Eventually there were too many people for the Makisi lounge and official services in the Tongan language began in the chapel, soon moving to the main church at 12 noon every Sunday. In 1979 the first Tongan presbyter, Rev. Samiuela Taufa, was authorised to administer the sacraments.

The Tongan Congregation is now recognised as one of the four congregations of Wesley Church. Presbyter is Rev. Simote Pomale Taunga. Home groups are also run in Central Wellington, Newtown, Strathmore, Tawa and Porirua.

The Tongan Congregation meets for services in the Tongan language each Sunday at 12pm, except on 1st Sundays when we take part in the combined Parish service of Holy Communion at 10am. Sunday School is run beforehand, from 10am-12pm.

We have a brass band known as the Taulanga U Brass Band, which meets every first weekend in the Old Hall, Friday-Sunday for a special camp. We do regular rehearsals and take part in many different special events, both at church and in the wider community.

This is held every other Wednesday night in the church, 6:30-9pm, alternating with the Samoan Congregation. On other Wednesdays, the prayer meeting is held in the New Hall, followed by refreshments.

Every Friday, we end a time of fasting with prayer in the Church and refreshments in the Old Hall, from 12pm.

Meets every Friday and Sunday nights from 8pm for fellowship, kava and other activities. (Usually the New Hall on Fridays, and Old Hall Sundays).

Special Highlights of the Year